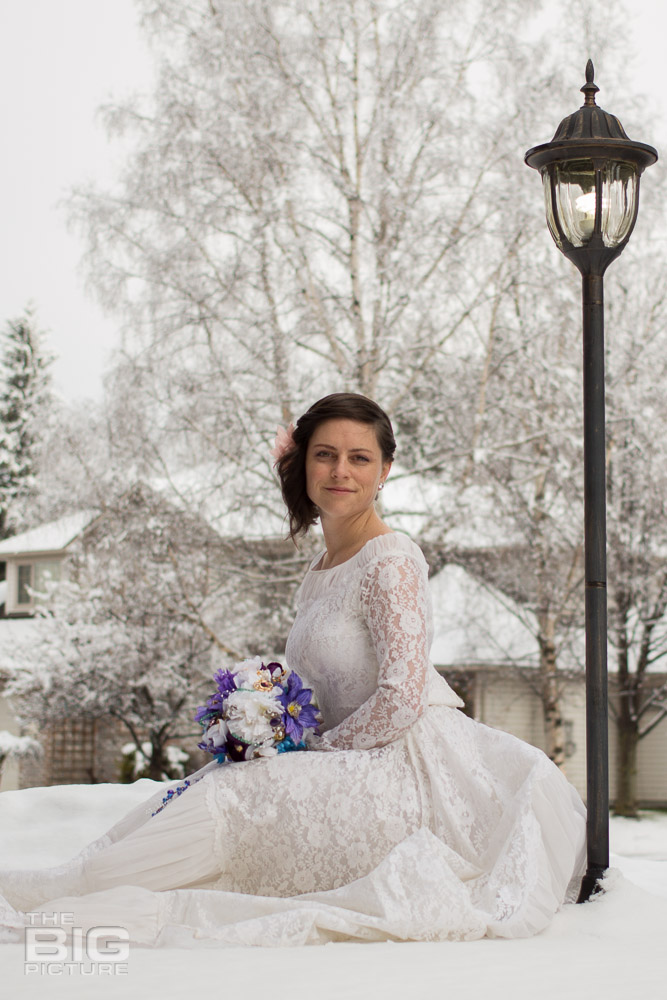 Andrew and I got officially married in January 2013, but we didn’t have a wedding. We are planning on having a wedding/reception this summer. Both of us have collected antiques since before we met and have a deep appreciation for things that have “experience”. I had wanted to use my grandmother’s dress, but it wasn’t quite right for me, so I’m having it remade into my flower girls’ dresses. Before that happened I wanted Andrew to take some pictures for me and my grandma. We didn’t have much time, only an hour or so, so the shoot had to be done in our home.

We had planned to take the pictures inside, but when we woke up it had snowed (you gotta love Prince George in the spring!) and so we decided to take some pictures outside as well. It’s always a bit of a challenge to take pictures outside in the snow while still keeping detail in the white dress. Setting the white balance to “cloudy’ does the trick for getting the colour of the dress to look like a true white. There’s quite a knack to taking pictures in such a bright situation while the light is still very flat. 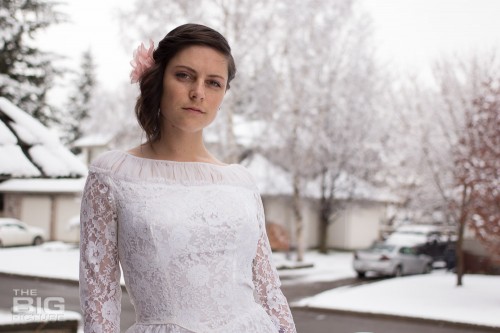 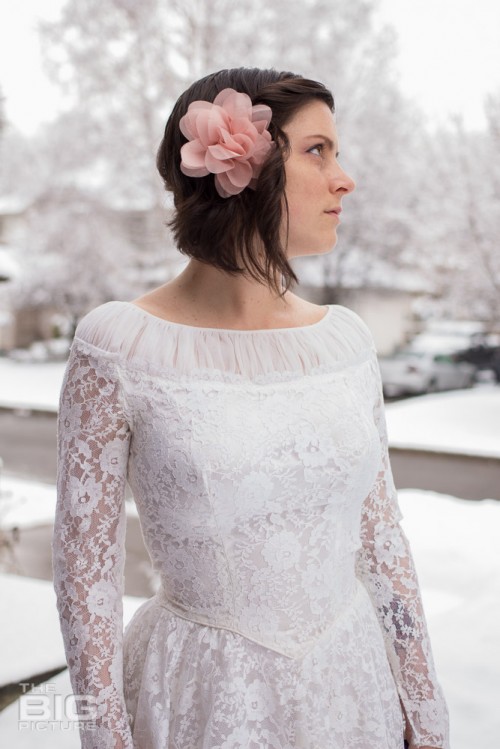 The dress itself is pretty tired and in need of repairs, so it was a challenge to take the pictures in a manner which didn’t show all the areas of the dress which were falling apart! The dress was also too small for me so I couldn’t do up the back of it… I had 5 or 6 safety pins fastening it together! As I was facing the house my back was exposed to the road… which meant my undergarments were as well!! An elderly gentleman passed by and wished us a happy wedding; I guess he didn’t see the dress stapled together and my ginch hanging out for the rest of the world to see! 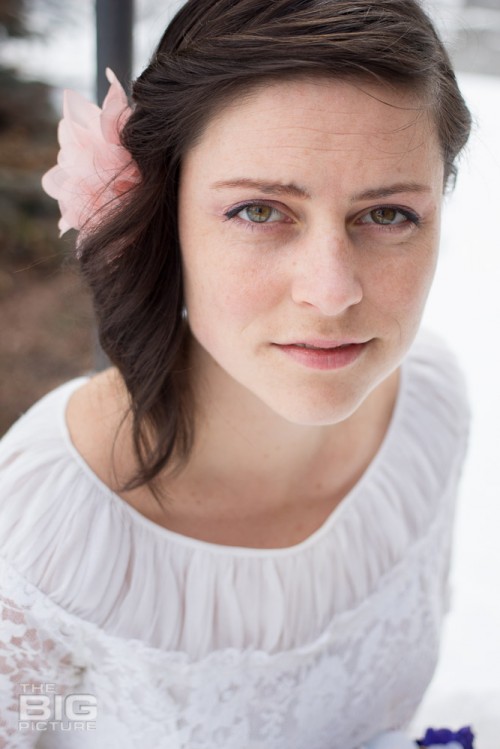 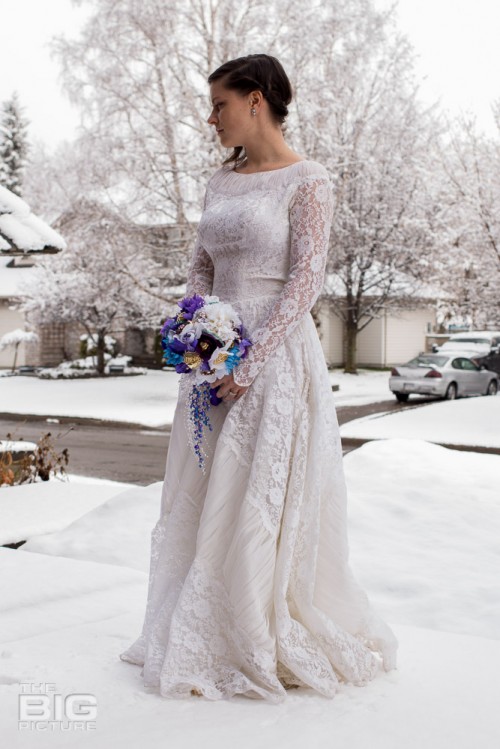 The bouquet I’m holding in the pictures was made for me by my mother and mother-in-law. It contains brooches from my mom, sisters, aunt, grandmothers and one from my great-grandmother as well as Andrew’s mother, aunts and grandmothers. It holds so many special memories and stories.

After we were finished in the frigid outdoors we moved to the sitting room. It hosts a plethora of antique furniture, so we figured it was an appropriate setting! 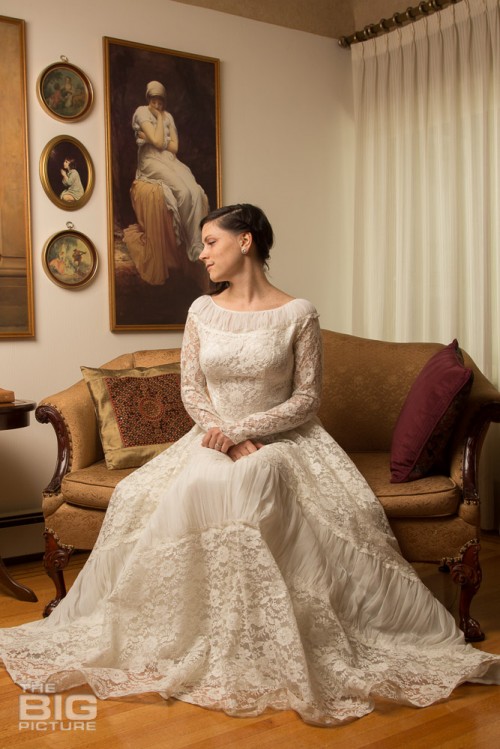 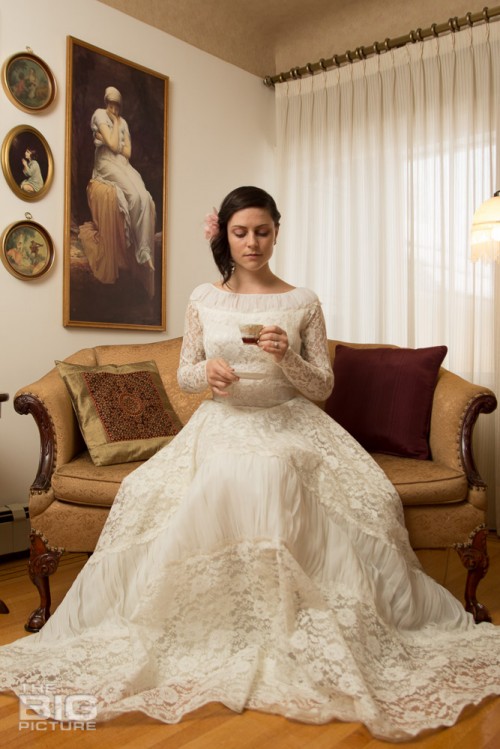 Andrew started off with a studio light and soft box but transitioned to a small flash and umbrella. It was somewhat tricky to balance the color between the two as you might be able to see above. The umbrella was cream coloured, so it added a bit of a ‘vintage’ shade to the scene. We both really quite liked it!

Since I was in my grandmother’s dress, I wanted to display something of Andrew’s grandmother as well. I decided on a teacup and saucer from a set that had belonged to her. We had a lot of fun in a short amount of time. I wish we had had more time to fool around and play a bit more. Oh well, maybe with the next dress 😉 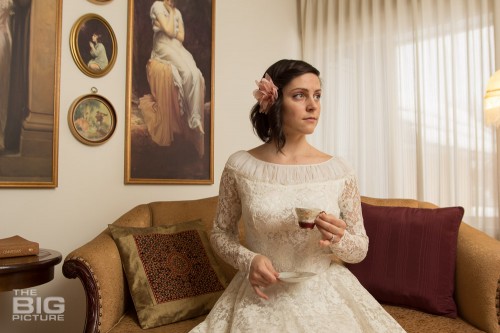 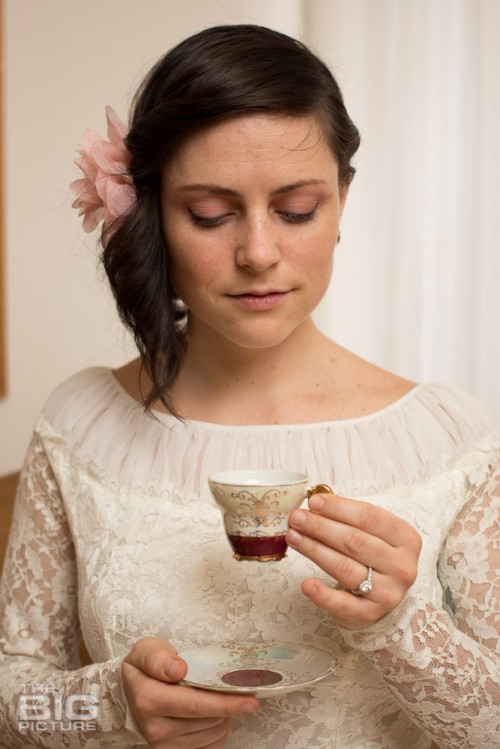 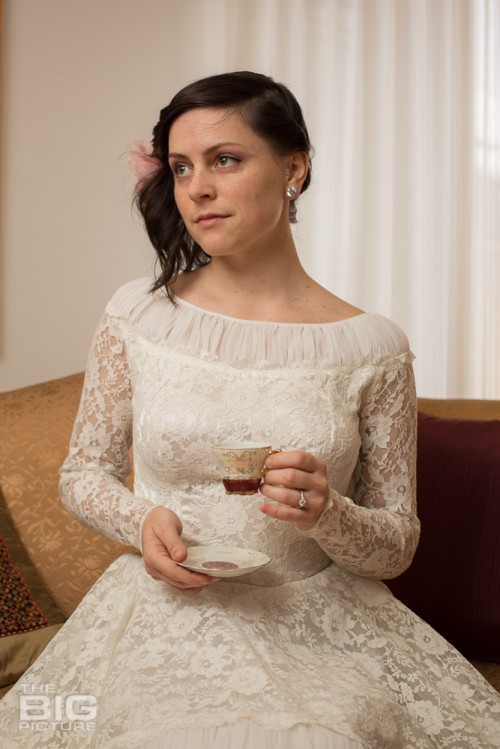